Additionally, we are aware that there is a portion of the competitive community who'd prefer to see game types that utilize the DMR, as well as more of Halo 4's sandbox. As a result, we are working with Walshy, StrongSide and Gh057ayame to develop alternate settings with balanced loadouts that offer varied options for Primary Weapons, Armor Abilities, Tactical Packages and Support Upgrades. We are still making final tweaks to these settings - they may launch with the playlist on Monday, or may be released in a future update. We'll be sure to announce a final, detailed breakdown of the settings that will be featured in the playlist in the Matchmaking section of the forums, so be on the lookout for that this weekend. We look forward to hearing your feedback on this playlist and will make changes and updates accordingly on a regular basis. 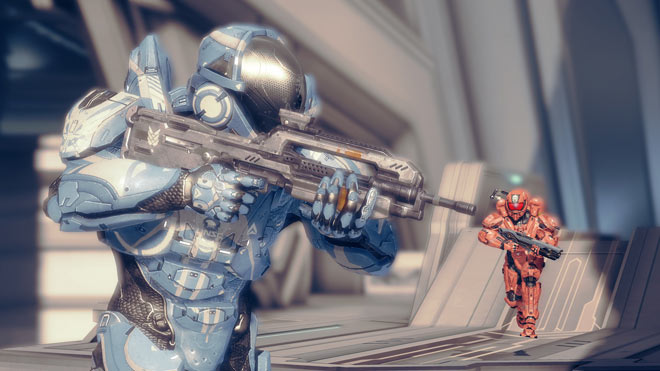 Here's what some of the players we're working with have to say about Team Throwdown:

"Saying that I'm extremely excited about the Team Throwdown playlist would be an understatement. I can personally attest to how much time, work and effort were put into these settings by the entire team, as well as the whole Halo community. These maps, game types and settings bring out a classic, competitive feel, and even provide room for the evolution of a strategic skill gap." - Eric " Gho57ayame " Hewitt

"I am excited to have a playlist that has the most competitive weapons, settings and maps that Halo 4 has to offer!" - David "Walshy" Walsh

"The first time I played these settings, I hit a quick scope to win a 49-49 standoff - what else can you ask for in a competitive playlist? You may not be able to get the rush of a tournament every day, but with this new playlist, you can experience the best competitive settings Halo 4 offers. I like the Battle Rifle start, which adds a definitive skill gap. I personally can't wait to start dominating in Team Throwdown and get my level 50!" - Michael "StrongSide" Cavanaugh

We're proud to be working with these individuals on the Team Throwdown playlist and encourage you to leave your feedback in the War Games Feedback section once the playlist is live.

In other news, we'll be reducing the score limit across the Team Snipers playlist from 60 kills to 50 kills (or 500 points) to account for the fact that instant respawn is disabled. Also, all of you Lockout fans will be happy to know that Shutout will be added to the rotation in the SWAT playlist. We'll continue to add new Forge maps to existing playlists in future weeks to ensure that there are new map and game type combinations to explore. Speaking of maps, we'll also be removing the Crimson DLC playlist from the rotation on Monday in preparation for the upcoming map pack, but Crimson DLC maps will continue to appear throughout various Matchmaking playlists.

If there's no Matchmaking Update next week, it's because I am at home playing Team Throwdown and haven't slept since it launched.

In early January, we announced that we had started work on a title update for Halo 4. That work is nearing completion, and it is expected to release within the next two weeks. It addresses some of the concerns we've been hearing from the community, but just to set your expectations accordingly, we know we still have work to do. There's more balancing to be done and more issues to address, and we are actively working with the Halo 4 game team to investigate the feasibility of additional fixes. We'll share the complete change list after it launches, but here are a few of the big ticket items:

Keep an eye out for the complete change list once the TU is live.

And with that, I'm putting a bow on this sucker and calling it done. I hope you have a wonderful Valentine's Day, Forever Alone Day or whatever you happen to celebrate, and I'll see you back here next week for a Bulletin that is sure to be majestic. Until then...