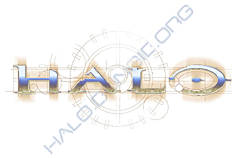 It began with a simple observation and question: Can the Halo logo be seen on these ships? That was back in August '99.

Then in a submission to the

The following day Alan Greene noted that the Covenant logo could also be seen on the "hover bikes" (scooters). He sent a series of screenshots to the Marathon's Story page here.

On the same day the Convenant Logo was brought up for discussion in our Forums:

Ok, so i'm going a little nuts with the photoshop and the new clearer movies, but forgive me. Anyways, i caught a really nice shot of the covenant logo on one of the fly-cycles in the movie and i did a bit of extrapolation and tried to make a 2d version of the logo in black and white.

What is that in there? a ship? a dagger? You tell me, i just work here.

See below for images:

Around the same time Joshua Inglima sent the following to the Marathon's Story page:

Well, after spending about an hour staring at the "Covenant" logo on the crafts, I decided to try to reproduce it in Photoshop.

I didn't get the scaling quite right, but it does give an idea as to what the logo may really look like.

Back to our Forums and our very own Louis Wu made this observation:

Well, yesterday Bravehamster posted some thoughts on the Covenant logo shown on the scooters, here.

(I'm posting this to a new thread because that one's nearly off the forum... if that link doesn't work, try here.)

According to the Marathon's Story page, Joshua Inglima did his own analysis of the logo, and came up with this.

However, having seen the November issue of Computer Gaming World, I think they're both wrong... it is the Halo "O". (My scanner is currently offline, so the best I can do is point you to Noctavis' scan of the image in question, which, while good, wasn't done with the intention of highlighting this image... so if anyone still disbelieves, I'll do my best to rescan.) You can check his image out here. The image on the second concept drawing is clearly (well, in the original it's clear) the Halo "O", and it can be seen again in its fuzzy form in the screenshot directly below the concept drawing. 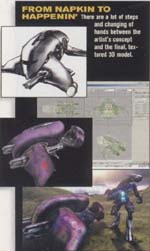 The supposed symbol on the Alien craft can be better seen on the chase craft just before the Aliens jump on them.

A recent GameSpot UK Halo preview provided us with these two screenshots showing very clear views of the Covenant logo.

See below for images (click on image to see larger version):

Take a look at the stylised Covenant logo above and then compare it with the logo at tyrell.hungary. Similar?