A couple of days ago, Xero dropped us a line and suggested that we'd missed a covenant weapon in our faq. We checked... and realized he was right. This encouraged us to dig deeper... and we discovered some interesting facts about Halo's weapons.

We now believe that (not counting vehicle-mounted weapons), we've seen 11 human weapons and 4 covenant ones. Let's start with the Covenant... the list is smaller.

We wondered, actually, whether these were the same weapon... and whether the blade simply forms around the body of the pistol (as seems to be happening in the inset image below). However, in the official trailer (the one found on Bungie's Halo site), you can see that the large flash is simply a firing effect. Only a firing frame is shown, but it's surrounded by non-firing frames. 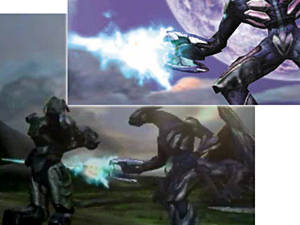 The other two covenant weapons are larger. For a while, we thought they were the same gun. We're pretty sure they're not, though.